James attended Chapman University’s Dale E. Fowler School of Law in Orange as a merit scholar and graduated in May 2022 in the top 28% of his class. At Chapman, James received CALI awards for the highest grades in Constitutional Law and Antitrust Law. He also served as a member of the Mock Trial Board and the Student Bar Association.

Prior to working at Berger Kahn, James was a law clerk for Kazerouni Law Group and the Consumer and Environmental Protection unit at the Orange County District Attorney’s Office.

In his free time, James enjoys rock climbing and playing table tennis. He is also an avid fan of the Lakers, Dodgers, and Raiders. 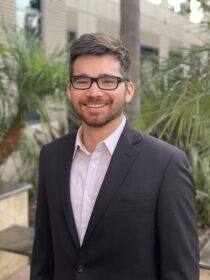