Fewer than five percent of attorneys receive the Super Lawyers recognition and this year, all six Berger Kahn principals plus two partners have been selected to the Southern California Super Lawyers list, a rating service of outstanding lawyers who have attained a high-degree of peer recognition and professional achievement.

“We have a phenomenal group of attorneys at Berger Kahn and I am very proud to see all six shareholders — who have practiced together for over 20 years — named to the Southern California Super Lawyers list,” says Craig Simon, Managing Principal of Berger Kahn. “To have two of us selected to the Southern California ‘Top 100’ list, and five of us in the ‘Orange County Top 50’ for 2014 is special indeed,” Simon added. Highlights include:

•    While named to the list of Super Lawyers for many years, shareholders Craig Simon and David Ezra were selected to Super Lawyers “Top 100” list for the second consecutive year.

•    Principal Stephan Cohn is named to the Super Lawyers list for the second consecutive year. New additions to be published in Super Lawyers for the first time in 2014 are Partners Dale Amato and Steven Gentry. 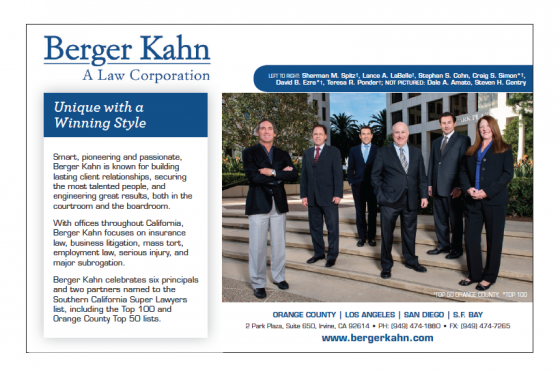