Principal Steve Gentry authored a column on the new evidence that has come to light regarding the extension of the statute of limitations for promissory notes. His column addresses the discrepancies between two apparently conflicting statutes of limitation.

Confusion Over Limitations Period for Suits

Many practitioners believe that the limitations period for bringing suit on a promissory note is four years. This view is based upon Code of Civil Procedure Section 337(1), which requires suit to be brought within four years in an action “upon any contract, obligation or liability founded upon an instrument in writing.” But there is more to the story. The reality is that, under the Commercial Code, the holder of a note appears to have six years to enforce the note, rather than four.

Therefore, if the “instrument in writing” qualifies as a “note,” the holder of the note arguably has six years, rather than four, within which to bring suit. So, if two apparently conflicting statutes of limitations exist, how does one determine which should apply?

There does not appear to be a California decision dealing specifically with the inconsistency between CCP Section 337(1) and Comm. C. Section 3118(a). Fortunately, however, the state Supreme Court has provided guidance on this issue in a case involving two other contradictory statutes of limitation. In Collection Bureau of San Jose v. Rumsey, 24 Cal. 4th 301 (2000), the court was called upon to decide which of two statutes of limitations applied to a suit seeking recovery from a man for the medical expenses resulting from his deceased wife’s fatal illness. The suit was filed three days short of the four-year anniversary of the wife’s death. At that time, Probate Code Section 13554 and former CCP Section 353, when read together, provided that a suit against the surviving spouse for the decedent’s medical expenses had to be brought within one year of the date of death. However, Family Code Section 914 and CCP Section 337(2), when read together, provided that a suit to recover from one spouse on an open book account arising from a debt incurred by the other spouse for the necessaries of life while they were living together could be brought up to four years after the date of the last item in the account. The central legal issue on appeal was whether the suit was governed by the one-year statute (in which case it would be barred) or by the four-year statute.

In concluding that the one-year statute applied, and that the suit was time-barred, the court applied several principles of statutory construction and interpretation. It observed that, in the case of conflicting statutes, “later enactments supersede earlier ones. … and more specific provisions take precedence over more general ones.”

When these rules are applied to the case of a suit on a note, it seems clear that the six-year limitations period in Comm. C. Section 3118(a) is controlling, and that the four-year limitations period in CCP Section 337 is not applicable. First, there is nothing vague or confusing about the language of Section 3118(a). Second, Section 3118(a) is more specific than Section 337, because the former refers to “a note payable at a definite time,” while the latter refers broadly to “any contract, obligation or liability founded upon an instrument in writing.” Third, Section 337 has been around since 1872 and was last amended in 1961, while Section 3118(a) was not enacted until 1992. Therefore, it is presumed that the legislature knew of the existence of Section 337 at the time it enacted Section 3118, and intended both statutes to have continuing viability; otherwise, there would have been no need for Section 3118.

The careful practitioner should also understand that, even though Section 3118 is contained in the “Commercial” Code, its application should not be limited to “commercial” notes. Section 3102(a) states clearly and without limitation: “This division Division 3 of the Commercial Code, titled “Negotiable Instruments” applies to negotiable instruments.” In addition, Section 2 of the Uniform Commercial Code Comment to Section 3118 contains references to “family transactions” and “family and other noncommercial transactions,” thus indicating that the authors considered this section applicable to all notes, not simply “commercial” notes.

It is also worth noting that Black’s Law Dictionary defines “commercial law” as “the substantive law dealing with the sale and distribution of goods, the financing of credit transactions on the security of goods sold, and negotiable instruments.” Black’s Law Dictionary (Eighth Edition, 2007) (emphasis added).

With these principles in mind, the knowledgeable practitioner should feel confident in filing an action to enforce a seemingly stale note, so long as the due date is within six years of the date of the filing of the action.

Steve Gentry is a principal in Berger Kahn ALC’s Orange County office. He can be reached at sgentry@bergerkahn.com. 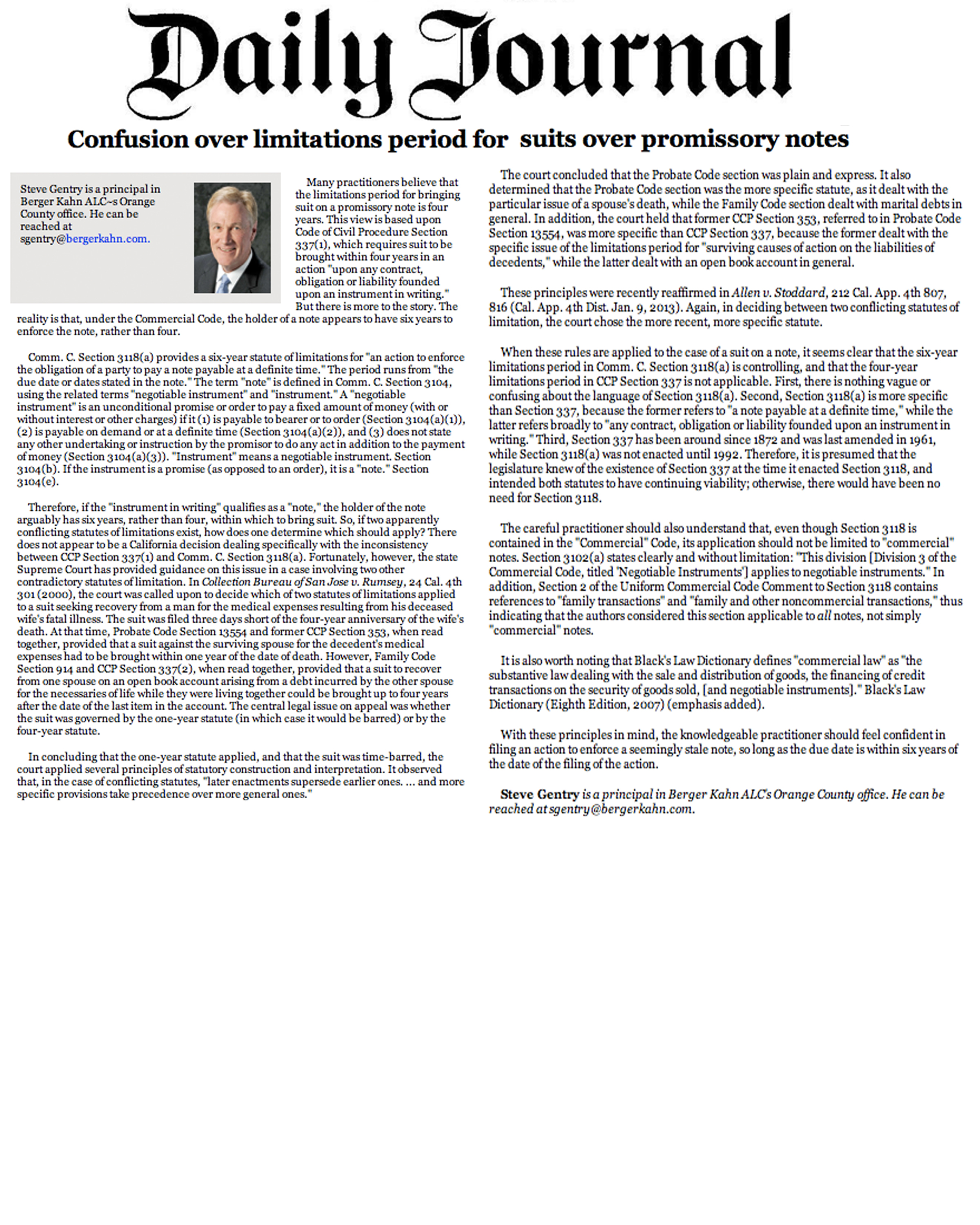