Nandita Nayyar is an associate in Berger Kahn’s South Orange County office. Nandita focuses her practice on insurance coverage and examinations under oath.

Nandita is an alumna of the University of California, Los Angeles and graduated in May of 2015 with a B.A. in History. Afterward, she went on to attend Chapman University Dale E. Fowler School of Law, graduating in the top 23% of her class. During her time at Chapman, Nandita was involved in multiple extracurricular activities, including the International Academy of Dispute Resolution Competition, ABA Client Counseling, and the Constitutional Jurisprudence Clinic. Nandita also served as a Board Member for the Diversity Social Justice Forum

While in law school, Nandita gained a great amount of experience. Nandita was a judicial extern for the Honorable Justice William W. Bedsworth in the California Court of Appeal 4th District in Santa Ana and for the Honorable Shelyna V. Brown in the Superior Court of California, County of Santa Clara. She also worked as a Certified Law Clerk in the Orange County District Attorney’s Office Gang Unit. Most recently, prior to joining Berger Kahn, Nandita worked as a Summer Intern at Wilson Keadjian Browndorft LLP in Irvine. 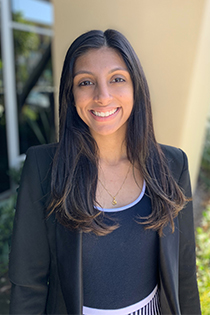