Andrew Wyatt is an associate in the Irvine office, focusing his practice on labor and employment and insurance coverage.

Andrew attended Loyola Law School, ranking in the Top 20% of his class. He developed strong legal writing and research skills as the Senior Production Editor of Loyola of Los Angeles Entertainment Law Review. He also held the title of Student Ambassador and participated as an Advocate for the Youth Justice Education Clinic and a student legal writing tutor. While in law school, Andrew combined his love of sports and writing while working as a law clerk in the International Sports Division of FOX Cable Networks in law school. In 2016, Andrew served as a judicial extern to the Honorable David O. Carter of the U.S. District Court for the Central District of California.

Andrew graduated with a B.S. in Sports Administration from University of Miami in 2014 where he was awarded the Patricia A. Whitely Unsung Hero Award for his outstanding service to the student body.

A California native, Andrew enjoys playing basketball, listening to vinyl records and going to Disneyland in his spare time.

Representative Matters
Berger Kahn Prevails On Recent NLRB Charge
Berger Kahn Partners Erin Ezra and Heather Whitmore and Associate Andrew Wyatt recently obtained a dismissal in favor of their client, an employer, on a Charge for violation of the National Labor Relations Act (NLRA). The National Labor Relations Board dismissed the case on the grounds that the former employee’s conduct was unprotected and not concerted activity within the meaning of the NLRA.

Berger Kahn Attorney Andrew Wyatt Helps High School Students Weigh College And Career Options
On February 4th, 2019, Berger Kahn attorney Andrew Wyatt volunteered as a presenter at PUC Schools’ 3rd Annual Majors & Career Event where he shared about his career and education experiences that brought him to where he is now as an up-and-coming attorney, with high school sophomores and juniors. 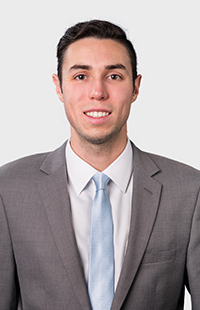